A conversation last weekend has led me to believe that the husband has been telling my family that I “still” don’t know how to cook. Well, I will not claim to be the best when it comes to culinary talents, but I have had my fair share of kitchen time at home. Enough to warrant a more confident “Yeah a little” when asked if I can cook.

In fact tonight, inspired by the chicken soup recipe from “My Little Paris Kitchen” (it’s called something fancier but my crappy Internet connection means I don’t want to google) and the fried chicken recipe from “Paleo Comfort Foods”, I blitzed some chicken breasts with an egg and some almond flour and rolled into the spice mix from the Paleo recipe and Voila! Homemade chicken nuggets — and they’re Paleo too! Not bad for someone who can’t cook :p 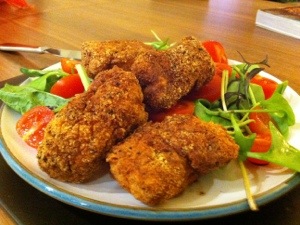 We discovered quite an interesting street food in Napoli. It’s called a Fritatina. One look at it and you would think it’s just another deep fried, battered food. Once you bite into it though, you realize that humble as it may be, it is tasty and very satisfying.

I think it is very much like Napoli itself. On the outside, it is just another European city with narrow streets and historical buildings. Once you delve deeper and start exploring, the city comes alive and you appreciate how simple yet profound it is at the same time.

In Napoli, Graffiti is everywhere, and we’re not talking Banksy-type art. It’s mostly writings on the wall (literally), and on church doors, and on posts and on stone…everywhere. The streets are narrow and full of people and cars, bicycles, scooters and delivery trucks that appear out of nowhere. It’s busy and it has its perils as we have been warned by locals to take care of bags and cameras while walking around.

But the surprises lie within and among the streets themselves.  The narrow streets are busy with shops full of “Presepi” paraphernalia.  A “Presepi” is your Christmas Nativity scene, but amped up to several degrees.  It includes Mary, Joseph and the baby Jesus and an entire village that will only be limited by your imagination and available space.  In the shops you can buy miniature houses, characters depicting local tradesmen, mini livestock and even small pieces such as tiny balcony railings.  A walk down Via San Gregorio Armeno can inspire even the least creative person (myself for example) to make one of my own.

If you do manage to turn away from all the trinkets and bits, you are bound to end up in a Piazza, or a church or a former church, or both. It will definitely have a rich history behind it, whatever church it may be. The architecture will be Baroque or Gothic or a re-created version of one or the other, and inside will be full of stories of great families whose remains may be kept within and of artwork that surely belong in the grandest of museums.

Even on less busy streets, you will be surprised by quaint little shops where they are completely unexpected. If you look above, you will find that the locals live above and amongst all of it. In fact, the locals live directly above Napoli’s rich history. Literally.

Underneath the city and spanning an area even bigger than the city itself, is a system of underground caves and tunnels that were historically used to quarry rocks, and then as aqueducts and then as a waste disposal “system” before they were used as bomb shelters during the war. It seems as if the city was built from the underground up…we were even shown a home that was built on top of what used to be a Roman theatre (and a B&B built on top of another area of the theatre as well).

And if all of that still doesn’t overwhelm your senses, then the food will definitely up the dosage. We waited for three hours to get into a Pizzeria that has been serving pizza since 1870…and it was completely worth every single second spent in line. In another part of town, we waited a a little less (maybe just half an hour?) for more mouth watering Pizza (no, not on the same day). If waiting that long is not for you, then you can elbow your way in into the lunch time crowd fighting for deep fried Pizza and the aforementioned Fritatina. When you’ve had your fill, head on to one of the many cafeterias for an espresso, and be like the locals and find yourself a spot on the bar to have your cafe (spaces are limited, but a little courage goes a long way). If you want to feed your sweet tooth, have a lip smacking good Nocciolato. This is normally thought to be espresso and Nutella, but it’s actually not Nutella. I don’t know what it is exactly, but espresso + Nutella is a different item on the menu. And I haven’t even mentioned the Baba, or the Sfogliatella and loads more dolci whose names escape me now.

Overall, Napoli is must-see, and when you come visit, make sure you’re senses are ready to be pleasurably overwhelmed. 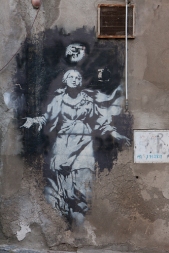 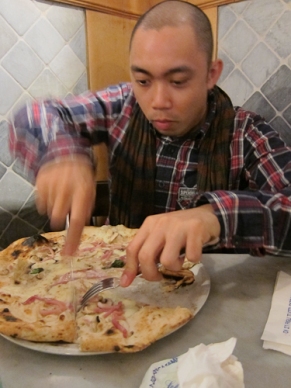 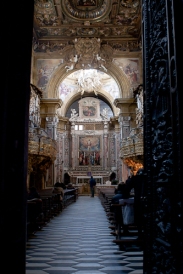 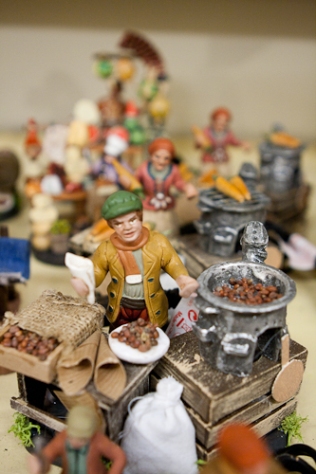 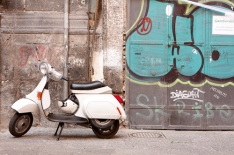 So I forgot to defrost the meat I was supposed to cook tonight.  Normally that would mean me rushing off to M&S to find something microwaveable and quick, paired with something sweet on the side (Resistance is futile when you’re there).

What I did instead was opened the cupboard to see what I had and opened my copy of Paleo Comfort Foods.  The end result is my version of their Fish Stick-O-Licious.  I’m supposed to use fillets so that you have proper “sticks”, but I wanted to use what I got (and I didn’t want fish cakes — been there done that.  Lots of times.)

via Instagram http://instagr.am/p/M84IVYEGzz/
Granted, they don’t look very “fish-sticky”, and they break up when you start eating them.  But they are pretty filling.
(Not posting the recipe for this since I’m not really a good cook / not very good with flavors. What’s good for me may actually be so-so for others.  Had I used the cookbook recipe strictly, then I’m sure it would be waaay better and post worthy.  But I didn’t so there.)

Last night, I had to carry two boxes of differing size and weight across the width of a football field and through 5 doorways. Luckily I do CrossFit and am a functional athlete so I managed without much of a fuss. What’s in the box you say? A trash bin and a food processor. Don’t mind the bin, it’s the food processor that got me all excited.

Socs and I have been meaning to buy one and finally it has arrived! It now opens up a whole new possibility in terms of food offering in the Vistan household. I’ve always had trouble adding more vegetables in our meals and hopefully this new gear will help. I’ve always thought it was easier to go Paleo here in the UK than back in the Philippines, but then I realized that being a Filipino in London is actually works out very well. I’m not a bread person so no problem there, rice here isn’t as good as back home so I seldom have them, and some of our home cook meals are actually paleo friendly! What I absolutely love about living here is the availability and variety of food items available. Mind you it sometimes gets difficult to find certain ingredients or cuts of meat but I manage, or just experiment with what is available.

Some say going paleo is difficult. I say keep it simple and keep an open mind and you never know what will come out of your kitchen. Stick with whole foods, eat meat and veg, stay away from grains as much as possible, don’t be afraid of fat and reduce sugar. Simple, tasty and quite exciting really. Alright, no more blogging and on to some cooking! (I’m off to my second dinner)